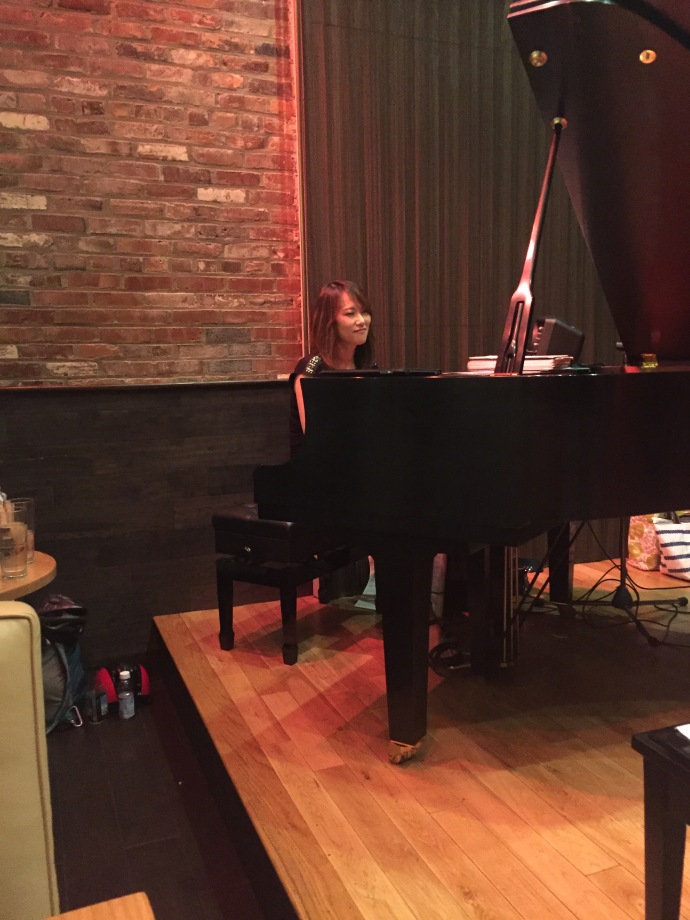 Yoko’s sets at Thelonious Monkfish are very lively. She’s sensitive to environment, so it’s a different scene to the calming sounds she sends out at her Sunday brunch at Ryles in Inman Square. She’s also sensitive to lineup variation, so tonight’s set, with bassist Sean Farias has different textures to the last one I saw, with The Fringe’s John Lockwood.

Opening with a Sonny Clarke number, “Something Special”, she rides Farias’ long, varnished tones like a tightrope. She’s balancing and moving at the same time. The song is spicy and percussive. She shifts radically to a soft but intense Latin number. She’s limber and spiritual here, pensive, then bursting out with kaleidoscopes of chords up and down the keyboard.

She sandwiches a John Lennon song, “Love” (from his solo 1970 Plastic Ono Band) with two numbers with a hard bop feel, and follows with an original, “Lantern Light.” This is classic Yoko, the yearning, the melancholy sadness, the grandeur and the fireworks displays of arpeggios, for all that continuously listening to her trio, drum and bass, and gently responding.

Yoko started work on a new album in July, with six albums behind her. The progression shows a musician becoming bolder and bolder with each new release. Sometimes jazzier, but also more rocking. She plays a lot of Beatles songs. “It’s funny, my name is Yoko and I play lots of John Lennon songs,” she says. She said there’d be more on the next record, but was coy about which ones. I suggested “Tomorrow Never Knows”, the 1966 acid drenched number from Revolver with lines from the Tibetan Book of the Dead. She smiled. Who knows?

Yoko is radiant and intelligent, with a light sense of humor, and dazzling focus. I have been listening to her for five years. She has never let me down.