What does a Miami kid like Ben Katzman have to offer the Boston scene? The JP Drive In. Ben makes things happen. For me, The JP Drive In has been the most exciting house scene over the past couple of years. The Drive In is the youngest scene, and kids come in with fire. Ben is only 22, but he is a prime mover. He’s got energy and flair. And he has ideas.

“I think the best way to contribute to a scene is be the best you can be,” he says. “Do you the hardest. The best way to make a difference is to add something to the table. Just be you and do you what you love.” Bands come and go, but the good ones always make a splash, because of people like Katzman.

Katzman’s aesthetic is simple. He loves Kiss, a supergroup perpetually creating a spectacle, but fun and never taking themselves too seriously. Would he book them for a show? “You know I’ve been holding a judge against Gene since I was 13. I sent Gene Simmons an invitation to my Bar Mitzvah back in the day. I probably should have asked Peter Criss instead.” 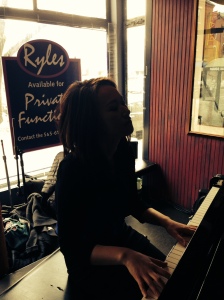 Already, as Yoko Miwa starts up her jazz brunch show this morning at Ryle’s Jazz Club, in Inman Square, Cambridge, I hear a surer, gentler, stronger, but smoother tone. She has a nice legato as she strings notes together in her solo. She has confidence now. She’s a new musician.

Yoko is seeking a new label for her trio’s next record, one that will gain her national attention. In the Mist of Time, her debut in Japan, was misty effort with little trace of jazz. As she progressed, climaxing with her fifth album, Live at Scullers, she really developed a hard swing, which blended with her own natural jazz temperament to create outright heartbreaking music. Her sixth album, Act Naturally, was showcased by John Lennon’s “Jealous Guy”, and Neil Young’s “Only Love Can Break Your Heart”, but my favorite was the McCoy Tyner number, “Inner Glimpse”, which brings back Coltrane memories. 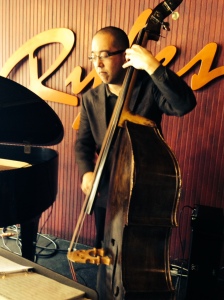 This morning, she features Keala Kaumeneheiawa on bass, in addition to her regular, right hand drummer Scott Goulding. Nothing has really changed in Yoko’s approach. It is just like a river, flowing through the jungle, with some occasional turns, and a different quality of light flashing on the surface as we go deeper in.

McCartney’s “For No One” has been popular with her, and she plays it this morning, beginning solo and rubato. It is like a Faberge egg, magical and glistening, with subtle, ornate detail. She takes you inside the song, showing what’s really inside The Beatles. Then the drums and bass come in, with a thud. It’s rock and roll. This is Yoko: the intellectual beauty, always making you guess at the next development in her style, then showing you what style really is: taking you to a song’s core, where the essence is released like perfume. No attempts to shatter form, none the less she is deconstructive, bringing out bluesy hints, playing with them, making them breathe, making a classical canvas alive with the qualities of abstraction.