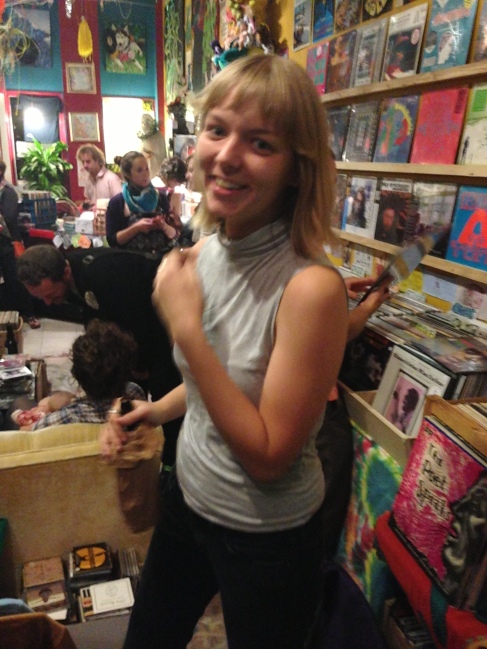 Sophie Dickinson plays a wooden harp, which she cares for visibly, polishing it with a black cloth onstage. On the other hand, *audibly*, she outright abuses it, accompanying it with cassette tape noise augmented by a small brown amplifier. She has a reason for this, though. I asked her was it just to be cool, and she said no (though it is), it’s because it’s what she grew up with. “I didn’t grow up hearing Celtic harp music; I grew up hearing rock music, and the noise of the television set before I practiced harp in the evening.”

She just released her first CD, *Tarp*. Strange title? That’s what I thought. Duh! It’s harp and tapes, like the muppets are puppets and marionettes. There’s little point in analyzing the music, though it is delicate and complex. That distracts from the reverie it puts one in, which is pastoral and dreamy, and also, even, a little psychy.

Dickinson played to a packed house at Deep Thoughts JP tonight. She played five songs, pausing here and there to set up her “extraneous sound”. Here are some notes on the performance.