Illusion of Porpoise has a bunch of strong women – Kate Lee, Lucy Watson, Sydney Kinchen, Heather Downing, front lady baby Ada, and now, guitarist Justine Berti. The band has a timeless sixties feel, abundant with the unexpected, a touch of the exotic. Just a bunch of friends to begin with, this band has real promise and may go places, as long as Ada has a nap. 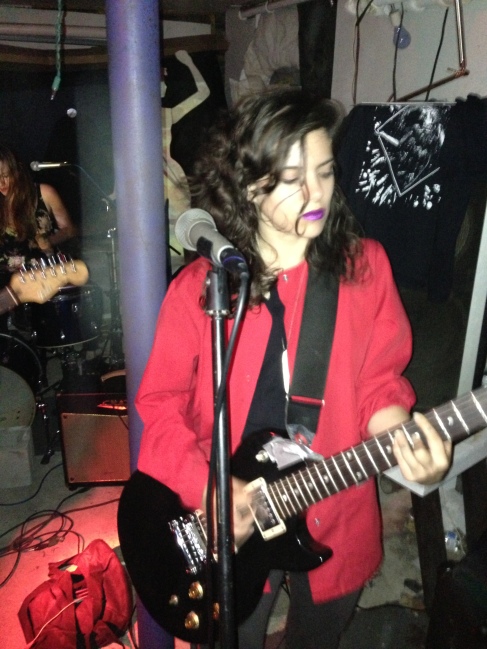 Advaeta brought the luster and love of New York City to JP Drive-In last September, Amanda, Sara, Lani – they are “as glamorous as stars in Andromeda” as I said in a poem. They have rolling waves of grand eighties-style Brit pop, pliable blades with nasty cutting edges.

Fat Creeps are not fat creeps. They’re cute girls. Their The Ascensions in my new novella, and they bring the audience hovering like a flying saucer into the space of the nightspot. “You guys are better than Nirvana,” a guy said. I couldn’t understand their lyrics to know if their songs are better, but I certainly enjoyed listening to them more.

Kassie Carlson has the energy of a jazz dancer, and a brain that can process the cross-weave of Guerilla Toss energy in a way that sends her body into a witchy frenzy, though she’s cute as a button and always smiles.

Sophie Dickinson, playing noise-interfered harp, has all the simplicity, charm, and grandeur of a country manor. She takes you to places in your mind – hidden passageways, gossamer laden attics rife with lace and antique dollhouses. Her energy is as effortless as a windmill churning flour.

Noell Dorsey has the most beautiful voice. She can be strange, or simply lyrical, eking bird tweets out of her mic-stuffed mouth, long trills that chill your spine, but leave you with the sweet warmth of summer’s end.