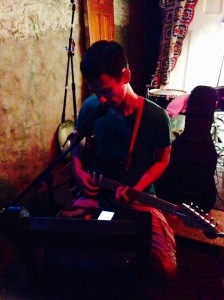 Noah has a voice like a nightingale, with the twang of a country crooner, like Hank Williams. His songs are wistful and wry, about awkward love and social situations. “Everyone will die,” he instructs us to sing. “Even Bruce Springsteen and Tina Fay – and your first date.” What do you know, it works, the singalong, the haunting chant of her chorus.

“When I went to make breakfast, the pan was still warm from the last time you used it,” he sings, his voice warbling and reaching a tremolo. This is what characterizes him: the beautiful style with which he treats the ugly details of life.

“William Malone” is the story of a drunken poet “whose heart’s too full.” No one wants to hear his tale, the events of which get strange – well, he’s peeing out of a car… Noah believes in him, though. “They just want to touch your soul,” he sings. “Let go.” Just another part of nature, something, and someone, to put in harmony with us.

Wes has an almost British sound, late Beatles, or Harry Nilssen, with jangly, windmill sounds on his Fender, and slow modal changes. His voice is deep and cavernous, echoey. There is tension and drama in his music, with twists and turns in the dark melody. Then again, it’s just like a young boy, singing on his way home from school.