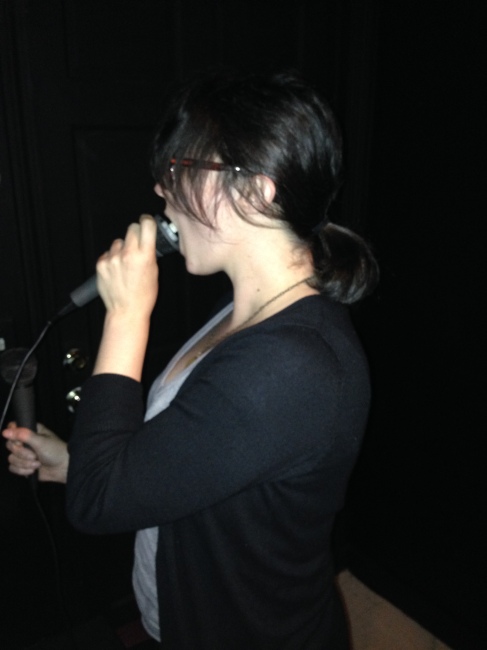 The Mobius Gallery, buried away on a quiet suburban street outside of Central Square, still has the Cambridge grandiose charm. It is artsy, too, with its black walls lighted up by track lights, giving it the mod quality it has inherited from its prior locations in the South End and South Boston. And it still carries the distinction of showcasing artists who still hit the public with a weird or offbeat aftershock. Jed Speare, who runs the music series, has the same knack the space has always had, often in performance art, for pulling promising new faces like rabbits out of a hat, and propelling them into greater recognition. Forbes Graham and Birgit Ulher already have international reputations, but their stars are still rising. Noell Dorsey and Morgan Evans-Weiler are comfortably ensconced on the local scene, and tonight’s execution showed they are rising too. 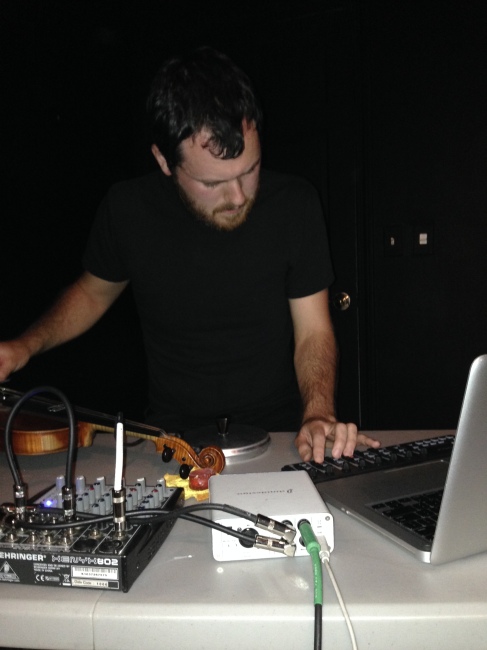 Noell Dorsey, who attended Longy School, has an exquisite, mellifluous voice, which she has extrapolated into stranger and stranger contexts of late, with good effect, to which she adds, sometimes – as tonight – keyboards. Morgan Evans-Weiler is adept at acoustic and electronic as well, playing violin in addition to computer and electronics. I have followed each for a number of years now, and they have, in the time, adapted to complex structures and strategies. Here are some notes from tonight’s show at Möbius, in Cambridge:
Skitterings
Noell lays down a spacey groove it’s like pots and pans being scraped and then an echo in a haunted house I remember Dark Shadows from the sixties the horror soap opera Clayton coming out of his grave now crickets chirping and a light is cast on the manor the green trees rustling ever so slightly and thunder crash buzzing and beeping Morgan with violin on shoulder holding it now like a magic wand Mandrake the Magician and the scrapes are like potato fingerlings and Noell breathes into her mic very sensually like loving and the violin skitters getting darkly romantic to the lady’s whimpering whispers which get hoarse and tough like horses and roosters and it’s morning tea in the farmhouse with the kettle whistling now she’s sweet like amber honey sipping and slurping warm rum incredible effects with her lips beyond the metallic scraping as she scrapes her vocal cords into treble chords then silence

Birgit Ulher’s and Forbes Graham’s set tonight was a weave of improvisations that sported the niceties of through composed music, marks and stabs and fragments adding up to a mural like notes inked on a cream staff page. Ulher, from Germany, has cool European austerity, while the American Graham never lacks the quirk and funk of the blues.

Patches of warmth and familiarly shared places with difficult climbs , as up a rock face; but the work rewarded patience, as motives unfolded and coalesced into greater wholes, seeming random bits of shrapnel collecting, becoming grand and weighty edifices shining in mist and moonlight. 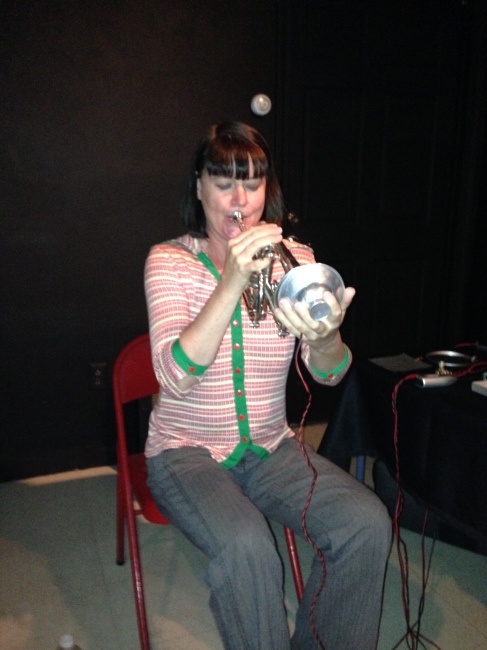 Birgit Ulher
Here are some more reflections:
The Soft and the Sour
Ulher a bubbling spring Forbes Bubber Miley the soft and the sour the splitting of the hour now like a long trombone down echoing halls and spittle from a spit bug a balloon losing helium doing loops in the air the lyricism is gentle creaking doors like accordions whirring broken fans the comfort of an old and broken in home thus the warmth carries in the stark realities of the hard and austere horns and now it’s like the time you put playing cards in the spokes of your bicycle wheel when you were five fabulous panoply of effects and all warm
And I pause and reflect in the atmospheric room track lights on black walls makes them almost blue Forbes in his dark purple striped shirt Ulher in a button down pink orange and likewise striped and the music is stripes of sound painting an aural canyon where the mules ride caparisoned with Aztec icons carrying obsidian idols in a psychedelic sack where the wind blows hoarse and strong fueling the flights of bats adding their own soft screech