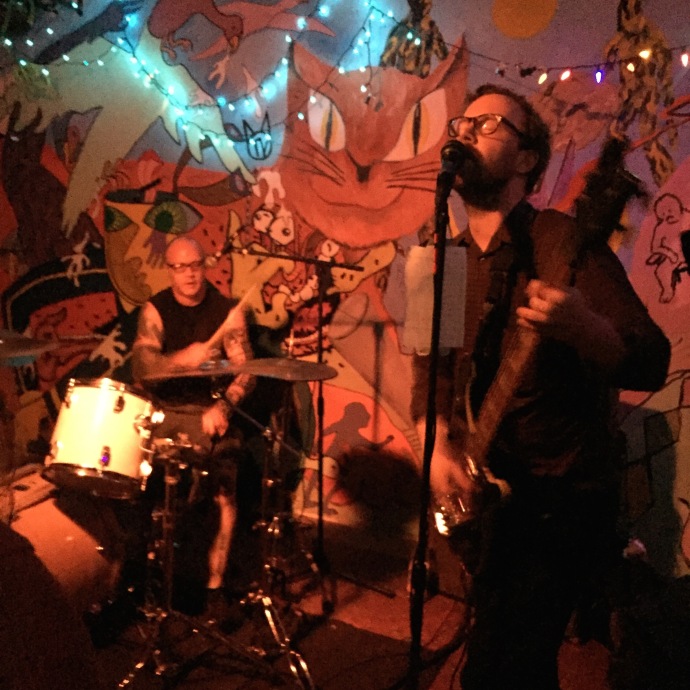 Sissy Spacek was John Wiese, master and monster of noise, who’s played with Merzbow, and avant jazz sax great Evan Parker. He’s got a duo now, with drums, and a beard, and he plays guitar. It’s just one straight shot of noise, with double screams, rolling drums, and guitar scratched to blood. Then it ends.

Sissy Spacek has done all kinds of things in the past, encompassed on a four disc retrospective a few years ago, so you never know what it’s is going to do, or how long it will play. Wiese is actually an electronic virtuoso, so the key tonight was surprise. Just a blast in your face, and stop. You could say fourteen-year-old kids could do this, and maybe they could; but maybe that’s the point.

The first thing you think about this quartet, with the funky intro, is Red Hot Chili Peppers. The singer’s got those loose, lanky moves, swaying about in front of the stage, but this is another kind of metal as it moves on. Short bursts of barely controlled noise, relentless.

Then the melodies develop. Dark, minor things, but still with abrupt stops, lightning drums and guitar riffs, caveman vocals, dark and husky. The cumulative effect is the wash of a tidal wave on a California beach, leaving the surfboards and babes in bikinis with a primal stretch of sand.

Dour starts with a tom rolling over off the stage. They introduce themselves: “Thank you. We’re Spinal Tap.” And they are: this isn’t hair metal from the ’80s, this is classic metal, with a clean, contemporary steel edge.

They vary their tempos, from rumble to race, bass, guitar, and drum. The bassist, tall blonde with short hair, screams in short bursts. The music is largely instrumental. It’s about the juxtaposition of rough textures, the crisscrossing and crashing as the guitarist loops chords like a Blue Angel jet, and the drums gather steam and stop in turn.

This is a metal crowd, lots of black, guy with a shaved head, no moshing, just serious absorption of the hypnotic trance the trio induces with their glacially shifting patterns. This is the venting of rage. You’ve got to vent, and Dour does.