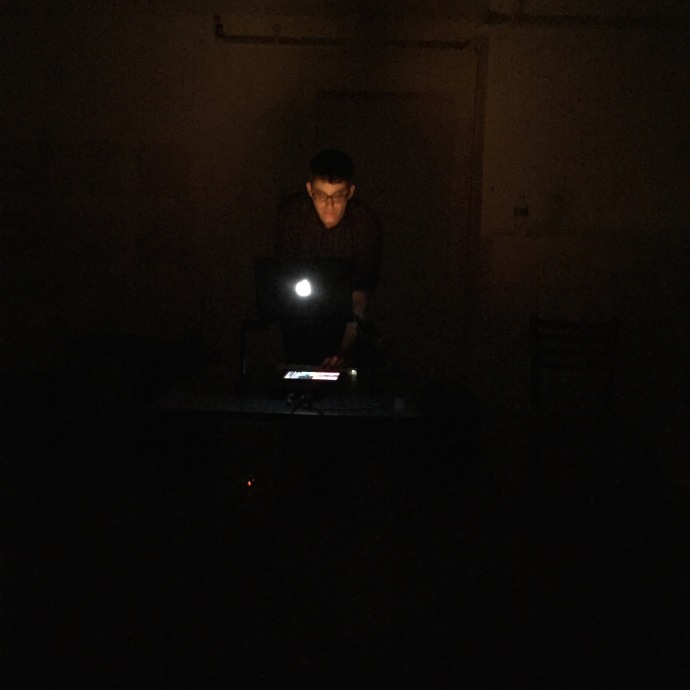 Microdots in color. Murray’s music puts you in a mellow trance. Very pleasant. Sonic frames getting larger, within other frames, dissipating in the distance, disappearing, reconfigured bold in the foreground, orbits within orbits of a solar system. 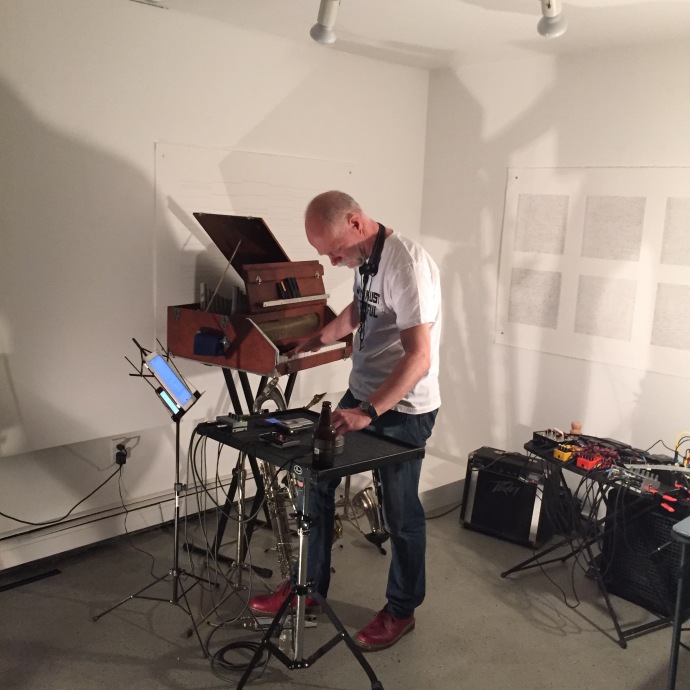 Steve Norton is divided between the celeste on his right hand, and the electronics on his left. Then he just leaves the knobs buzzing and picks up his bass clarinet, with his signature liquid notes, somehow reminiscent of Eric Dolphy but more classical, like Luciano Berio’s Sequenza, perhaps. He uses harmonics, splitting his reed into two concurrent notes.

There is humor, aggression, but it is as mild as tea. Chromatic arpeggios, rumbling held bass notes.

Muffled recordings of serious voices from a radio, sped up and slowed down. Somehow this is disturbing. But it’s funny. It becomes abstract. Almost just like the timbre of the alto saxophone he is about to pick up.

It is very disconcerting, the way the sax loops and hops, dives with the distorted voice recording in the background. If you listen to him carefully, the sax is very inventive, bright, spirited, spritely and free. But the strange, low voice is a disruption. Then things become strange, strangely pleasant, with his tinkling on the celeste, diatonic, echoing, like a Night Gallery soundtrack.

Steve picks up the contra-alto sax. The lines he plays are mellow and playful. They swing, like Barney Bigard from Ellington. This is the nicest part. It makes you feel calm now, just classic jazz, bent into an avant-garde mold. 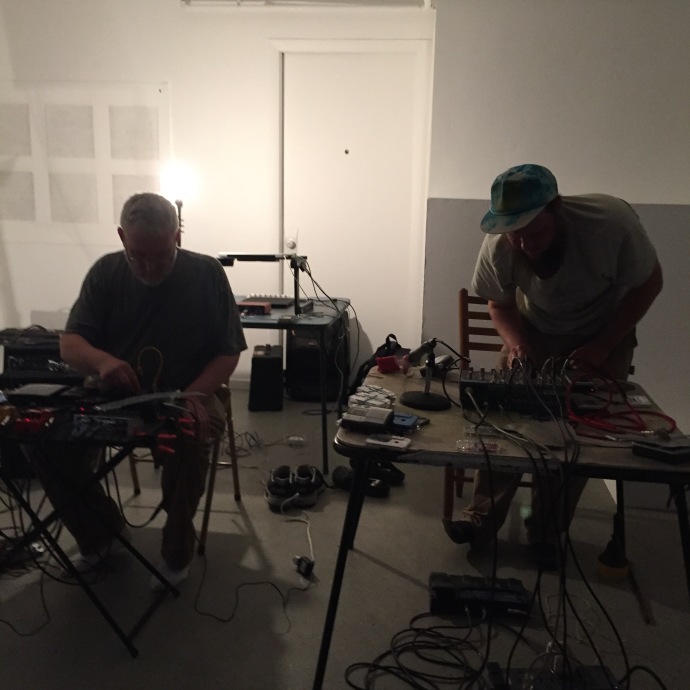 The mood, tense, immediately dissipates as Michael’s gears hum and click. They rotate, like a lawnmower engine. It’s just like my grandfather’s three-acre estate in Connecticut, where I used to ride with him on his sit-on tractor. Foam is liquid, bubbling, and scraping. This is a duet now, sonorous as church bells. Amazing how electro-noise can put you in the mind of nature, especially with Foam, who loves nature, working with it, living with it, a nature boy.

Then there is more tension, tension of a night forest, with owls on the prey. Everything is dark, except where moonlight strikes a stray branch.

It’s a boiling cauldron of emotion, though still quite quiet. Glimpses of calm, but no sense of clear direction. We wait. Blurred, scattershot memories. Harder still to believe we are in a different place now. It’s a road stretching into the sun. It goes on forever.

Life in the sun: there are dogs barking, there is a farm, chickens clucking. The sun sets. All is quiet. The wind blowing the beams of the barn, the creaking, the sounds of passing autos. They take you to the quick and the raw, the headaches and the knots in the flesh, the whole body frazzled; then healed, whole again as the leaves blow in the dark.

Two musicians, sitting still behind boards of electronics, white space with a gray floor, scattered speakers, snare drum, antique keyboard against which a bass clarinet rests. We have been nowhere but inside. But it takes us outside.